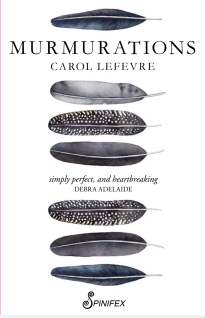 Based in Adelaide, South Australia, Carol is a short story writer, novelist, journalist and essayist. She talks here about the structure of this deftly constructed multi-layered book, her haunting use of silences and gaps, the inspiration of Edward Hopper’s paintings, influences of other writers working in the short form, and the practicalities of creating this compelling series of interlinked stories.

Emma Ashmere: You’ve described Murmurations as a novella,  a composite novel, and as a short story cycle. Each ‘chapter’ can be read as a discrete short story. The characters are linked in complex and sometimes random ways, surfacing in each other’s lives either centrally or on the periphery. One major event happens off camera, Erris Cleary’s death, which echoes throughout the book, from the opening story ‘After The Island’ to the final story ‘Paper Boats’. Characters – and readers – peer into the characters’ lives directly, or obliquely via hearsay. Can you talk a little about your use of gaps in the book, how you decide to what to put on the page, and what you leave for the reader to fill in for themselves?

Carol Lefevre: The gaps, or silences, between stories in a short story cycle or composite novel are, I think, one of the most fascinating aspects of the form. In an essay “On Writing Short Books” in Stranger at the Door: Writers and the Act of Writing, Kristjana Gunnars says: ‘The silence itself, which occurs between fragments, must become eloquent.’ To me it is an understated eloquence, and one in which the reader must play their part. Because – aside from the obvious function of shaping a shorter work – the silences between stories invite the reader to participate in creating meaning around the un-narrated events.

In Murmurations, the gaps ask quite a lot of the reader, especially as the death of one of the characters, Erris Cleary, occurs off stage. But while Erris is an important character, the book is really about a group of young couples; it charts their marriages as they do and don’t fall apart, and follows them into later life. To have put Erris’s death on the page in such a slender book would have overshadowed the private struggles and sorrows of all those other characters, and my hope is that by suppressing the details (as Edward Hopper erased detail in his paintings) it becomes more of a haunting than a sensational event. 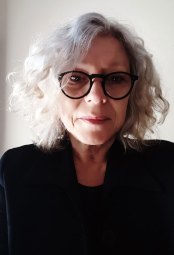 EA: Writers are often advised to nail ‘time and place’ from the outset. In Mururmations, time roams about, much like memory, but is anchored by each protagonist and their circumstance.

As for place, the details of the natural world – the woods, the houses, the lakes, the moors, the mosses – are rich and bleak, in sharp focus and yet mirage-like and distant. At the end of the book you mention the book’s setting is not necessarily in one country, and that you’ve used the paintings of Edward Hopper as a spark for the stories. Can you talk a little about drawing on the specificity and universality of Hopper’s work, and how this influences time, place, or structure and characterisation?

CL: I love your perception that time roams about in the book ‘much like memory’, because often in the stories characters are looking back over their lives, remembering what happened and how they got to where they are in the present. The backwards structure of the story “This Moment is Your Life” is one of time pushing deeper and deeper into the past, until it suddenly comes up short in the present moment. Overall, time is anchored at various points, yet by such small details that it would be easy to pass over them, for example the publication date of  The Feminine Mystique (1963), and the short-lived history of disco music (all over by the end of the 1970s). Almost the last thing I did in the editing phase was work out a detailed timeline; I wanted to make certain that everyone’s stories fitted together, and I had to make a number of small tweaks.

Place was much more difficult to manage than time, since I’m a writer who loves the specific details of settings. I’m very aware of the influence of landscapes, how they affect everything, from the way people talk, to the way they dress, the way they hold themselves under the physical, political, and emotional weather of a place.

The first story was written as a response to the Edward Hopper painting Automat, which is so obviously a New York picture, and unfortunately it is a city I have never visited. Then the back-story that began to form around the figure in the painting came to me from somewhere I’d once lived, and it became difficult not to allow that landscape to seep through into the writing. As I began to realise that there would be more than one story, I resolved to keep the overall setting vague, despite Hopper’s paintings being so very American. Once or twice it nearly got away from me, with the mention of specific birds, and mosses, and again with the writing of one character’s homesickness without being able to mention the place she was desperate to return to – that really did test me.

Hopper’s paintings are remarkable for their erasing of detail, which makes them both arresting, and dream-like. It is that dream-like quality that has always drawn me to them, and I like to think that the careful erasing of details in the stories gives Murmurations a similar other worldly mood. 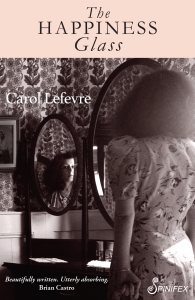 EA: In your previous book The Happiness Glass, short stories are interleaved with memoir, an act of laying down and yet blurring lines between fact and fiction. In the final story of Murumations ‘Paper Boats’, the protagonist posts off her short story into the darkness – addressed to The New Yorker. She ruminates on the reality that much of writing is about waiting – a common experience, I suspect for many short story writers and novelists. Can you tell us about your process of putting these eight stories into one book. For example, when you finished a new story, did you press on with the next one, or did that newer story affect the earlier ones, prompting redrafts before you continued building the whole?

CL: The writer character in the final story shares some of my thoughts and feelings about writing, as well as my reverence for certain writers. Like me, she takes time to recover from rejection, which she experiences as shame, though she recognises that this is an irrational response.

The stories in Murmurations unfolded slowly but steadily in the writing, and more or less in the order they appear in the book. It was quite a different process to that of The Happiness Glass, in which some of the stories had already been written, and a few had even been published, so that it was more a question of having discovered a new context for them alongside the essays.

With Murmurations, I wrote all eight stories before I considered the cohesiveness of the whole; then, I did move one story back a little bit to make the timing less tricky for readers. Once all the stories were written I also had to track the elusive character of Erris Cleary, and decide whether I had given enough details about her life for readers to be able to imagine the rest. I suppose some readers might wonder why I was so sparing with information about Erris.

In Paul Auster’s The Art of Hunger, the French writer Edmond Jabès says in an interview: ‘To tell a story, in my opinion, is to lose it…But if I say: he was born here, he died here, a whole life begins to take shape, a life that you might be able to imagine.’ I love that quote, and the sense that by erasing detail, as Hopper did in his paintings, readers are encouraged to enter the text, to create meaning by reading through the lens of their own experience and imagination.

CAROL LEFEVRE holds a PhD in Creative Writing from the University of Adelaide, where she is a Visiting Research Fellow. Her first novel Nights in the Asylum (2007) was shortlisted for the Commonwealth Writers’ Prize and won the Nita B. Kibble Award. As well as her non-fiction book Quiet City: Walking in West Terrace Cemetery (2016), Carol has published short fiction, journalism, and personal essays. She was the recipient of the 2016 Barbara Hanrahan Fellowship, and is an affiliate member of the J.M. Coetzee Centre for Creative Practice, where she was Writer-in-Residence in 2017. Her most recent books The Happiness Glass (2018) and Murmurations (2020) are published by Spinifex Press. Carol lives in Adelaide.

Thank you Carol for such an illuminating and thought-provoking interview!